All through July, a shrill, high pitched, repetitive sound punctuated our days.  By days, I mean all day.  From sun up to sun down–which in Maine in July, is about 15-16 hours.  By shrill, I mean this.  Pretty early in July, we identified the source of this constant sound.  The source was nearly always perched in the trees on the edge of our yard–just over from the hammock chair and just beyond our garden (the two places you’re mostly likely to find me on a non-work day in July.)  Bird ID books and bird call apps helped us identify with zero doubt the call of the broad-winged hawk. Bird books and apps did not help us discern how long Screech (as we started calling her) would be sharing (dominating) our auditory space.

Until Screech, I would have said without a doubt that birds calls are some of favorite noises on earth.  While I don’t always want to be up at 5AM, to be woken early with birdsong is a delight.  We live in a wooded location with a yard full of bird feeders and native plants.  Birds communicating with one another and the world at large is the constant soundtrack to spring and summer, and we love that.  It is a music that brings up notions of wildness, freedom, joy, and possibility.

At least, it was until Screech.  The first few days it was kind of fun.  Discovering a hawk as such a close neighbor, ID’ing it, recognizing it’s preferred perching tree, that was all good. But the persistent call, every few minutes for the majority of the day, soon overcame my curiosity and delight.  Screech soon started feeling less like a good neighbor and more like a burden–one we could never lift as we couldn’t understand what it was doing or needed.  Surely a hawk has better things to do all day than screech from the lowest branch of a white pine on the edge of a yard?  Aren’t hawks supposed to be out, silently soaring at dizzying heights, diving down with speed and stealth for prey?  Was this hawk, hanging out in a tree all the time and screeching, just not good at being a hawk?  I slowly started resenting Screech for pulling me out of the moment of tending my garden or reading.  Even in my resentment, I recognized the human-centric arrogance of it, my hypocritical judgment about some bird calls as beautiful and others as painful.  I knew Screech belonged far more than I did, but I could not quell my discomfort with its call.

A few weeks in to Screech’s tenure, we stopped at our favorite source of both bird food and bird knowledge, Freeport Wild Bird Supply.  We shared the tale of our new neighbor with the owners, who, as always, skillfully translated the bird language for us into something we clueless humans could understand.  They explained that Screech was likely a fledgling hawk.  When we protested–no way, she’s huge!–they nodded wisely.  “Yes, that’s how it is with fledglings.  The parents stuff them as full as they possibly can, the young ones can even end up bigger than their parents.  And then the parents leave.  They don’t come back.  The fledgling has to figure out how to hunt for itself, and if the parents are around it will not make that effort.  So that bird is on its own, calling for food, until it learns how to hunt.  It takes a while; that’s why the parents stuff it so full.”

Whoa….Hungry.  Alone.  All day, every day.  For weeks.  That’s such a different story.

Screech isn’t Screech at all,  she is a young hawk, all on her one in a big and mystifying world, unable to even figure out how get basic need #1 met.  In some ways, I was right in thinking this hawk was no good at being a hawk.  But I missed the really important, really incredible part–that she was learning how to be a hawk, and I got to watch that happen.  That soaring flight and incredibly hunting skill is not born.  It is earned, through tremendous struggle.  All I had to do to be a witness to this amazing journey was let go of my own story about what a day in the garden should sound like, and pay attention to her story.

Witnessing a hawk becoming a hawk.

Once I started paying attention to her story, all the irritation and resentment was gone.  I didn’t think of her as Screech anymore.  I paid attention over the next few weeks to her slow excursions–first a few trees over, then a few more, then a tree all the way across the road.  I paid attention to her first attempts at hunting (songbirds at the feeders–theoretically easy bait but not good prey for her, she never succeeded here.)  I paid attention to the clear connection between her increasing comfort level with venturing out and the decreasing frequency of her call.  I paid really close attention when a couple times while I was out in the yard, she flew close enough that I could hear her wings flapping and the wind they generated.  Finally, I saw her perched over the meadow at the other end of our property–according to the bird experts, the perfect place for a broad winged hawk to hunt.  I did not get to see her feed herself successfully, but I know it happened because she finally stopped calling.

I kind of miss her, now.  I wish I hadn’t wasted so much time on being irritated and had paid more attention to the little details of her journey into adult hawk life.  There is part of me that likes to imagine that she recognized, once I understood her story a little more, that I cared and was rooting for her.  That I saw her (finally) as so much more than Screech and very much wanted her to feel satiated and safe, at the very least.   And, at best, content and fully able to be and do all that a grown hawk is and does.  I am thankful for the close presence of this wild creature for so long–and especially that I got to see her grow fully into her wild being.  I will try to always hold her as an example of the beauty, struggle, and patience required for all creatures, including humans, to grow fully into themselves. 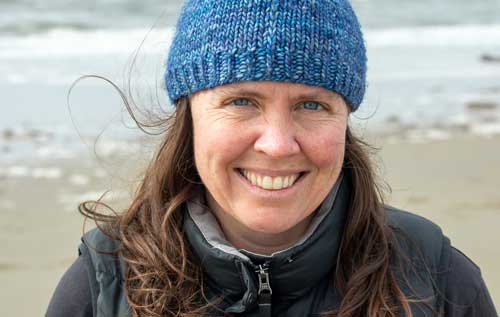 I’ve worked in both the social service and environmental education fields, and have learned that combining the two is a deeply powerful way to support people.